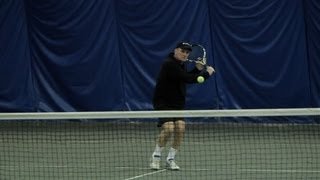 Tactics for singles. Well, you don't know what tactic you are going to use unless you know how your opponent plays so we are going to talk about three tactics against three different types of opponents.

First, you often might come up against a pusher. We call a pusher a player that just gets everything back, who has really foot work, runs everything down and just gets every ball that you hit to them back. So, how do you beat a pusher? First, you want to attack a pusher as best you can. You want to try to penetrate their consistent defenses by hitting really good deep shots. Another way to beat a pusher is to draw them forward. Why? Because a pusher loves to run side to side and camp out at the baseline. They don't generally like to come forward. Pushers like to stay back and get the ball back. If you can hit some drop shots or what we call sink shots, low soft shots, make them run in then you can either pass them or lob over their heads. Also, because a pusher generally doesn't have a very good volley and a very good overhead because they don't spend their lives playing at the net. They spend their lives at the back being defensive. That is probably the best tactic to use against a pusher.

Kirk: One comment on the style of play these days is there are so many players now with these semi western grips that have great forehands and not necessarily great backhands. How do you play against that player? One thing that these players are very good at is hiding their backhand so they are adept at moving to the left, moving to the left. If you fall into the trap of trying to force the ball to their backhand they don't have to do anything to hit the backhand better. So the trick against the player who covers up his backhand is to get the bear out of the cage. Hit the ball to his right. Make him move to his right. Make him chase the ball down and hit a forehand. If he doesn't hit a winner, and he won't very often, you can now make him move to his backhand. He might have Popeye's forehand and Olive Oil's backhand.

Speaker 1: So remember, your tactics and the strategy you employ are dependent on who you are playing.
Duration: 02 Minute, 40 Second
Rating: 4.83 - Excellent
Definition: HD
Published: 6 Years Ago
Author: Howcast